The Dew Bank is a simple but effective small scale solution, the fog collecting water bottle, perfect for dry desert areas. Inspired by the desert beetle, who uses the bumps on his back to collect water droplets from air and let them run down his body into his mouth.

The water collecting methods of  Onymacris unguicularis (the head stander beetle), commonly known as the Fog-basking Beetle or the Namib Desert Beetle. The Dew Bank allows for fog to collect and create droplets of water that are collected in the dew bank eventually making a beneficial amount of drinkable water. The dome-like gourd enables the droplets to roll down the surface and into a collecting pan that holds the water until somebody either drinks the freshly collected water or empties the pan out.

​It is not yet capable to provide water for an entire community, but it is a start in the right direction. It could be an inexpensive solution for personal use. But it would need hep to get it of the ground and make it more that just a prototype in the hands of the designer.

​Under the company Yanko Designs ​Pak Kitae always had an interest in resource sustainability. This creation was inspired by what a single drop of water means to a person who lives in a desert climate and the life or death scenario that is in the balance of the presence of water. He is still researching and improving his invention with the intent to revolutionize water shortage problems

He is not the only one and the race is on. Our 6 legged friend is inspiring a lot of people. Time will tell who will make the best design for personal and communal use, from big fog collecting nets, to small collecting tools…every drop counts! 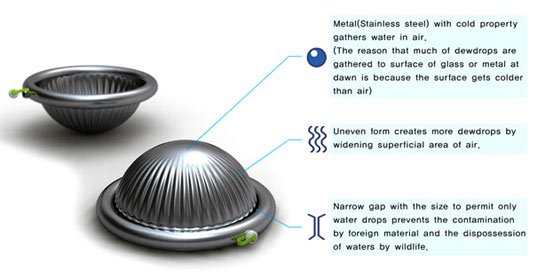 When a beetle saves the day